You are here: Home / Articles / Abu Dhabi’s War On Recycling

Abu Dhabi alone produces more than 11 million tonnes of waste a year, of this total waste only 30 percent is recycled. The city has made a goal that by the year of 2030, from the waste, 80 per cent will be recycled and 100 per cent of the hazardous waste will be treated.

To realize this goal, everyone must participate. Abu Dhabi wants it’s residents to recycle more, but as most of it’s residents are expats on a two year or less turn-over, it makes it more difficult to get the message through.

Abu Dhabi is getting ready to launch a new collection system that will replace the old paper system with an electronic system. This new system works by building a database with the collected data from the producer of the waste to the environmental service and the waste disposal sites. This will ensure that the right waste will be collected by the right vehicle and then make it’s way to the correct site. But for this to be successful the residents must be aware of where to place their garbage and how to correctly separate it. 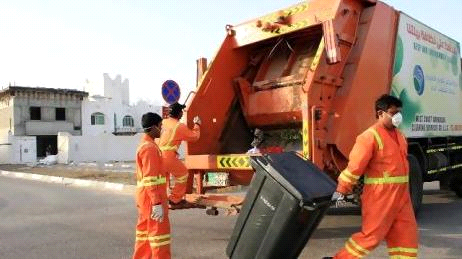 In 2016 Abu Dhabi started color-coding their garbage bins, this meant that every household received a black bin for general waste and a green for recyclable waste. The issue here is that the system is quite new, so many of the apartment buildings built before 2015 does not have a garbage chute for both general waste and recyclable waste, and with many residents being expats they’re not aware of the system. A solution to this problem would be to inform visitors who plan to stay for a period longer than six months about the system and the importance of seperating ones garbage.

The winners of the 2017 Imagine Cup was a group of three young men called Green Jam. They came up with an innovative idea to reward citizens when they recycle. The person recycling has to scan a code, then put the item in the bin where it will get sorted using basic mechanical techniques to identify it and place it in the correct place. The reward can be used to recharge credit on phones and public transportation cards, until then the points will be stored in the users cloud. The group came up with the idea after they saw a person placing an item in the wrong bin. This system makes it a lot easier for the collection team to get the garbage to the right places and not wasting time and energy on sorting tonnes of garbage. 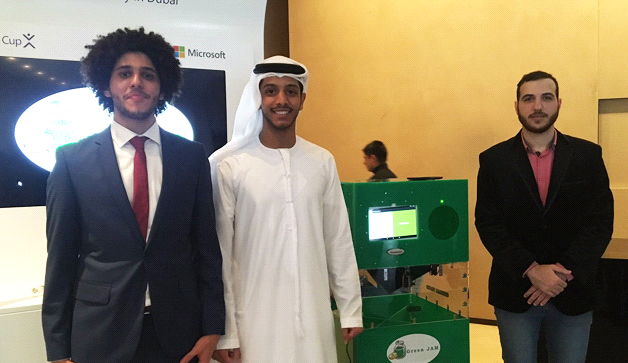 Recycling is very important for the environment, as most of the waste that end up in landfills produce methane which is one of the worst greenhouse gasses. Another reason why recycling is important is because it takes a lot more energy to produce a new product than it does to recycle an old.

1.4 million tonnes of waste in Abu Dhabi is municipal. To achieve their goal, the city must raise awareness about sustainable consumption and production, people must adapt a better consumer behavior, where we don’t buy more than we need and in that way won’t produce as much waste, which will eventually lead to a better environment for all.

Could Eco-Parks Be The Solution To The Growing Desert?A Cleaning App For Egypt?